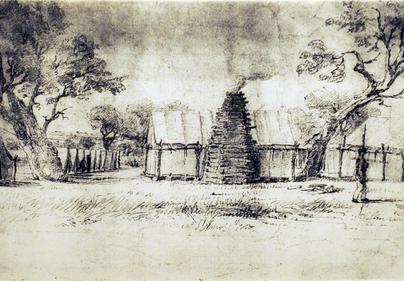 This mid twentieth century painting by Gotthold G. H. Lentz shows the layout of Fort Martin Scott as based on sketches and description given in the military records of the National Archives. 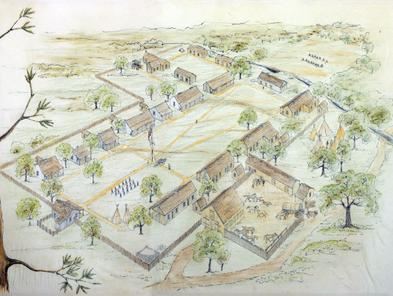 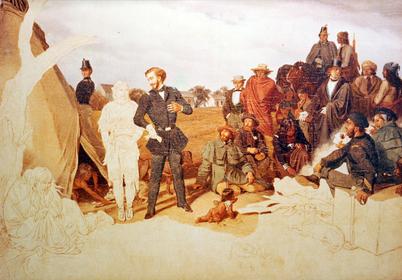 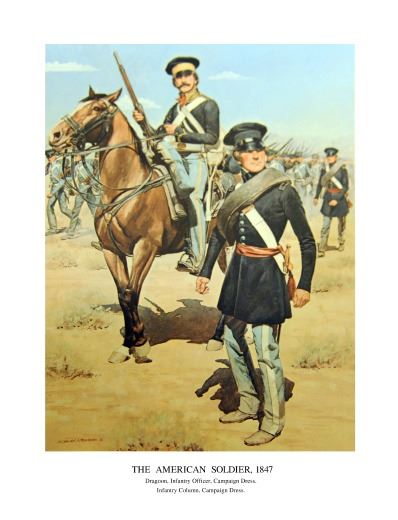 Fort Martin Scott was established as Camp Houston on December 5, 1848, and was the first United States Army Post on the western frontier of Texas to protect Texas settlers and travelers from Indian depredations. The post was two miles southeast of Fredericksburg, Texas on Barons Creek, a tributary of the Pedernales River. The Eighth Military Department renamed the post in December of 1849 for Major Martin Scott (Fifth United States Infantry), who was killed at the battle of Molina Del Rey in 1847. Fort Martin Scott served as a first line of defense, keeping the peace and minimizing possible friction caused by an active trade between the Comanche and German settlers of Fredericksburg. The soldiers also represented the one constant source of hard cash for businessmen in this rural Hill Country community.

In all likelihood, the fort site was used by Texas Rangers as they patrolled in and around present day Gillespie County during the 1830s and 1840s. Texas Ranger Colonel John H. Moore, with three companies of volunteers, pursued native warriors in 1839-1844 along the Concho, Llano, San Saba and Pedernales rivers. During 1840-1844, Captain John Coffee Hays and his Ranger Company were reportedly involved in actions at Enchanted Rock, Bandera Pass, Painted Rock, Walker's Creek and other nearby locations. Battles were fought with Comanche, Apache, Kiowa and Wichita warriors, as well as outlaw desperados.

Fort Martin Scott consisted of a complex of twenty-one buildings, some of which have been restored. The fort was initially quartered by First Infantry under Seth Eastman and by the Second Dragoons of the United States Army under Hamilton Merrill. Besides providing protection for settlers in the area, the soldiers patrolled the San Antonio to California road offering escort protection to the many wagon trains traveling to the western gold mines and the newly established settlements. Other U.S. Army units stationed at Fort Martin Scott included Eighth Infantry with officers such as James Longstreet and Richard Irving Dodge.

As the frontier moved west of the Hill Country, the strategic significance of the fort diminished and from late 1852 through 1853, the fort assumed the role of forage depot. Fort Martin Scott closed in December of 1853. After that time, it was occasionally used as a camp by the U.S. Second Cavalry under Robert E. Lee, Texas Rangers and by the Confederate States Army. In September of 1866, General Philip H. Sheridan and the Fourth United States Cavalry were at Fort Martin Scott to secure the frontier once again from possible Indian depredations, but military units abandoned the post at the end of the year. The facility was later abandoned and then sold to and occupied by the Braeutigan family; it was purchased by the City of Fredericksburg in 1959.